From March 3rd to April 4th, 2022, the Addison Artist Group will have an exhibit at the Zero Station Gallery in Portland. The show is named: Quotidian : Seen

It will be nice to have a show again in spite of the (hopefully) waning Covid presence that is still with us. I am happy to be showing with such a talented group of artists. The participating artist are: Karen Bushold, Dan Dow, Diane Hudson, Jim Kelly, Ruth Sylmor, Fran Vita Taylor, Dave Wade and Andrea van Voorst van Beest. Zero Station is a small gallery so the exhibit will be small but it will have some fine work. I will be showing the grouping of photographs above called: “Desire & Decadence” that investigates the definition of beauty of the human form.

In spite of the Covid situation I am happy to have participated in different exhibits. Recently I got a call from the folks at the Union of Maine Visual Artists. They were organizing an abstract photography exhibit and asked if I had an interest in participating. The show was first planned as a gallery exhibit but later (because of Covid)  was planned as an on line show. Basically I am a street/documentary and portrait photographer but it was interesting to experiment with the “Abstract” idea. I started out with basic landscape and then tried to simplify the information in the image, reducing it to the basic forms and colors. Finally adding line and drawing to the image. The show turned out to be successful. Other participants were Mark Barnette, Jim Kelly, Lesley MacVane, CE Morse, John Ripton, Ann Tracy, Dave Wade and Mason Burns. Good company to be in.

Edgar Allen Beem did a very nice review in the Portland Phoenix. 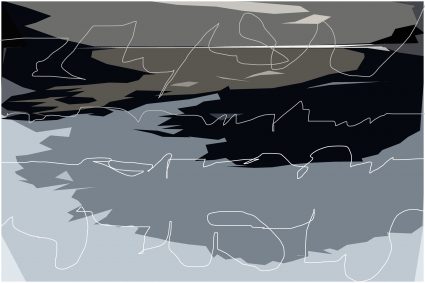 The Maine Jewish Museum opened its doors again. They completed restoration after the fire last April. Curators Nancy Davidson and Nanci Kahn and I had been planning an exhibit for a long time and this month I was happy to install my exhibit: “Rituals”. I am installing a new gallery containing the images of the exhibit. 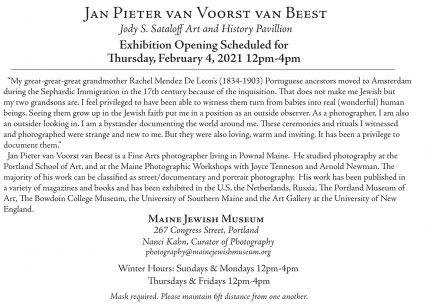 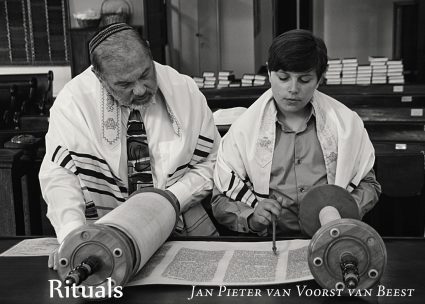 The director of the Maine Museum of Photographic Art, Denise Froehlich, invited me to submit some work for, and then help her with the curating of this exhibit. Denise has been the director of the Museum for the last seven or eight years and has so far mounted a formidable series of photographic exhibits which should be counted among the best in the state. I was honored to be asked to assist her in this endeavor and have enjoyed it. It turned out to be a difficult task mostly because of the abundance of very high quality work that was submitted. The concept of the “Portrait”  was left to the interpretation of the the artists and it was remarkable to see how much space there is for interpretation. The finished show is an interesting take on the concept with some of the area’s best photographers included. I strongly believe it is a significant show. Hope you can come in to see it. The exhibit will be up from Thursday June 14th through most of September. The exhibition space for the Maine Museum of Photographic Arts is housed on the fifth floor of the Glickman Family Library at U.S.M in Portland. Please join us for the opening reception on Thursday June 14th, from 6 pm to 8 pm.

I did submit some work for the exhibit that is part of a larger project called: “Urban Street Shots”. These are photographs I took last year at the famous Coney Island Mermaid Parade. 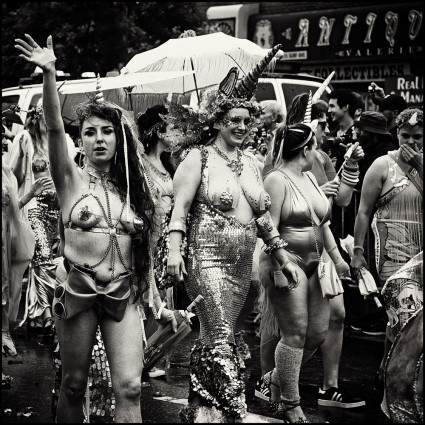 Images of Children at UNE

The exhibit at the Art Gallery at the University of New England ran from January 11, 2018 to April 1st. It was a diverse exhibit showing photographs of children from around the world, some vintage photographs from various collections as well as many photographs by contemporary Maine photographers. I was pleased to have been represented with six photographs, one of which is now in the collection of the Art Gallery.

It was wonderful to see one of my photographs (a New York subway photograph) displayed in the UNE exposition  of the newly named: “Steve Halpert Photographic Collection.

Just a week ago, in connection with the upcoming Thoreau exhibit at the Maine Museum of Photographic Arts the book: “Walking” by Thoreau was published by Tilbury House Publishers, with a foreword by Adam Tuchinsky. The book contains 20 B&W photographs. I am pleased to have 4 of my photographs in the book. 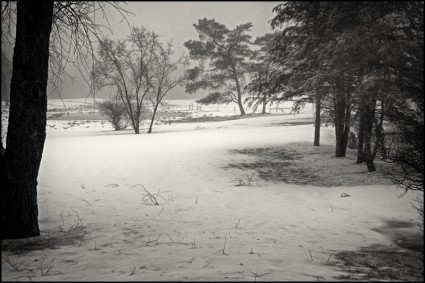 The photographs for the book and for the exhibit were curated by Denise Froehlich, the director of the Maine Museum of photographic Arts.

The other book, recently published by Down East Books is: “Maine, Life in a Day”. My photograph was taken in the Wells Wood Turning  & Finishing Company in Buckfield. It shows machine operator Roy Bragg at work. 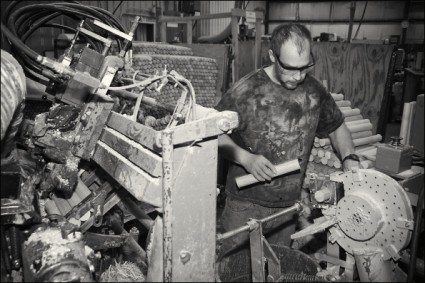 The Maine Historical Society put the 400 Years of New Mainers exhibit on line. Tilly Lasky, the curator, did a fine job. If you wish to check it out, here is the link:

Meanwhile the immigrant photographs went from the Camden Library in February to the library of the Mesalonski Highschool in Oakland and then in April they moved to the Waterville library to be exhibited.

I am also happy to announce the opening of my exhibit at the Jewish Museum in Portland opening at March 9th.  The exhibit will run through April 30th and consists out of 13 Silver Gelatine prints of Portland. The photographs were taken between 1988 and 2007 and are from a series of photographs called: “Portland in Black and White” 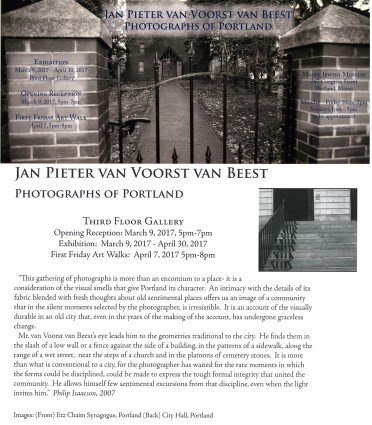 Happy to get a nice review of the exhibit by Daniel Kany in the Audience Section of the Maine Sunday Telegram on April 16!!

here is the link:  https://www.pressherald.com/2017/04/16/photographs-of-portland-offers-understated-sophistication-in-black-and-white/

The photographs from the “New Mainers” book will be on display in the Picker Room at the Camden Public Library during the month of February, starting at Sunday 2/5.

The exhibit will be a perfect accompaniment to the Camden Conference : ‘Refugees and Global Migration, Humanity’s Crisis” which will also runs through February.

Branching Out and a New Exhibit at 3fish!

“Branching Out”, a photography exhibit curated by Bruce Brown showed at the UMVA Gallery at CTN on Congress Street in Portland from July 7th until August 27th. It was a very good exhibit featuring the work of 39 Maine photographers. I feel privileged my work was also represented in the exhibit. I hope you got an opportunity to see the show.

In September we will have another exhibit at the 3fish gallery on Cumberland Ave by the artists of the Addison Woolley artist group. I will be showing some work from a series “Urban Street Shots”.  The photographs were taken in cities like Amsterdam, Paris,  and New York and all concentrate on interactions in the  human landscape. 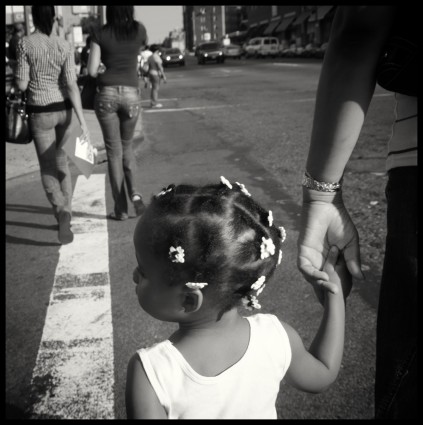 It is exciting to have some work that seems to have a good amount of staying power! This seems to be the case with the “New Mainers” photographs. The Maine Historical Society is using the photographs for an exhibit planned to open in February 2016. The photos will be displayed with materials about immigration in Maine, going back 400 years. It seems to be a timely exhibit, taking into account the recent talk about the subject. 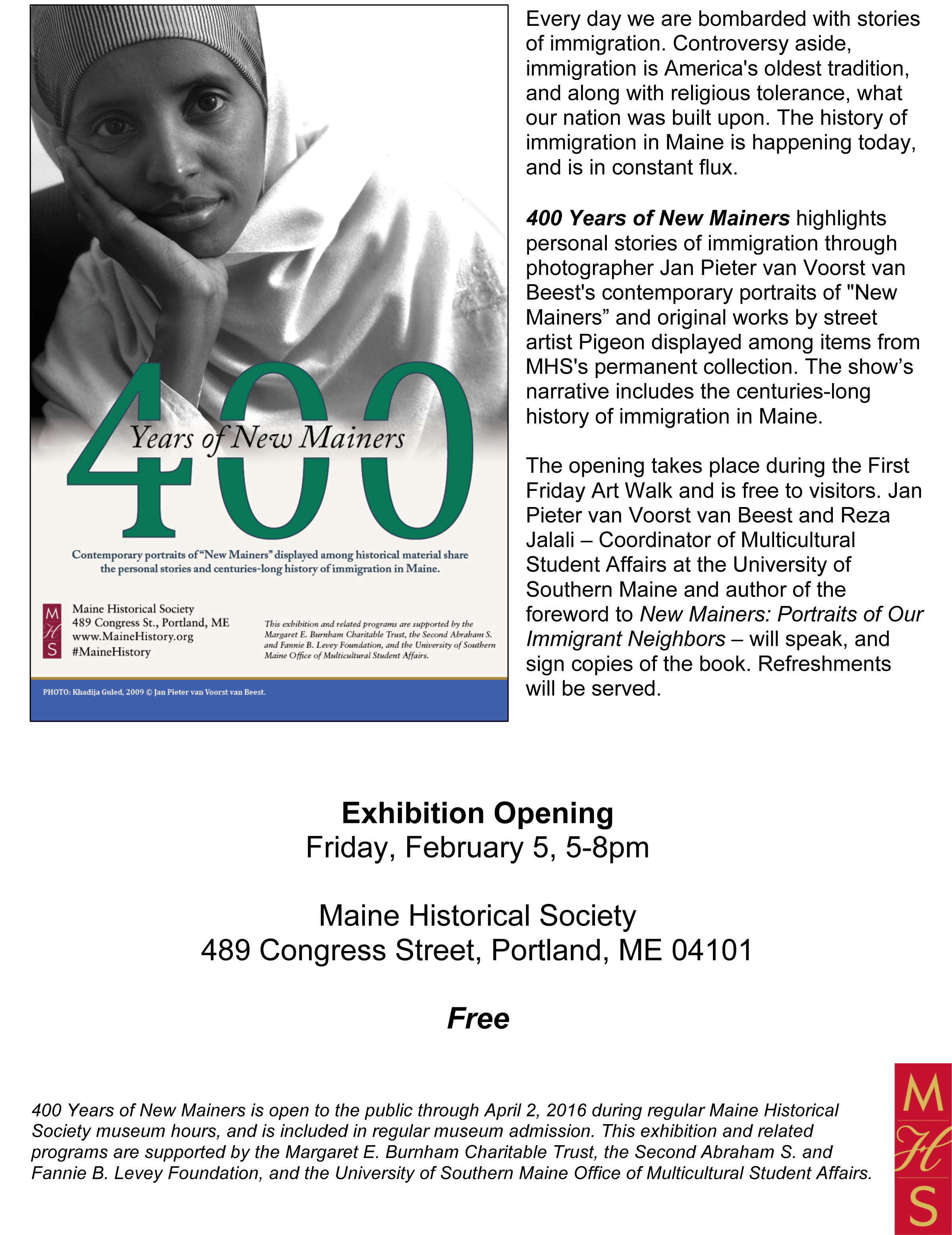 2015 was a good year in photography for me. I was lucky and honored to participate in several exhibits,  a portfolio of my “Subway Pictures” was published in Black & White magazine, one of my photos won a prize in the “Maine Photo Show” and my work was part of several reviews by Daniel Kany in the Audience Section of the Maine Sunday Telegram. (March 15th, the 3Fish Exhibit, and October 4th (The 3 City exhibit at UNE). I was happy about the reviews, ( in one review Kany referred to my photographs as “Gritty” , in the other one he called one of my photographs “Gorgeous”) I found the way he described my work pretty satisfying. It is not Kany’s job to make me feel satisfied about my work but if it does, I don’t object. In both reviews he brought up the matter of “photographing people without their consent” which is a perfectly legitimate subject to bring up, certainly as it pertains to my work. In one of the reviews, while commenting on one of the photographs of a sex worker in Amsterdam, he observed that the window in which the subject was situated had a “No Photography” sign in it. So why did I take the photograph? In the Three City show he refers to my “Covert” subway shot of a tough guy in a white shirt. He finds the photograph “Gorgeous” but with an “odd punctuation” about questionable  permission.  Let me first say that I think bringing up the question of permission in documentary or street photography is timely especially in these times where the privacy versus safety issues are the talk of the day. So the subject is close to my heart because when doing such work I find myself often in situations where getting permission for certain shots is  impossible, mostly because if the subject is being made aware,  the photograph would cease to exist. Documentary and street photographers photograph the world around them. They photograph the human condition and human behavior. In most instances when a spontaneous opportunity for such a photograph occurs  the subject of such a photograph would ideally be unaware that a picture is being taken. If there were awareness  people would “act” and not behave naturally. We usually photograph in the public domain, (and if not, permission should be granted) and (especially) these days, one could hardly expect privacy while spending time in public places. We live in a society of rules and, while in public, as members of this society, there is an expectation that we behave according to these rules. If we deviate from these rules it is done at our own risk. So if one gets photographed while misbehaving in public, I’d say that would be too bad. Besides, today we get photographed more often than we realize.  There are security cameras every where.  Legally there is no problem taking photographs in public places in most countries, although the rules may vary somewhat from country to country. There are pretty clear rules about how to use these photographs. (Commercial use, editorial use etc.) Historically the “photograph taken in public” without permission has been an important part of the medium. We can go back to the 1938 “Subway Portraits” by Walker Evans. He covered up his camera with a cardboard box while taking his famous subway portraits. It does not seem that Bruce Davidson asked for permission for his 1980 “Subway, N.Y.C.”  shot. Helen Levitt photographed street children “without being seen by them”, and had a major exhibit of these photographs at the Museum of Modern Art in 1943. Both Robert Frank and William Klein often photographed their subjects without even looking though the view finder! 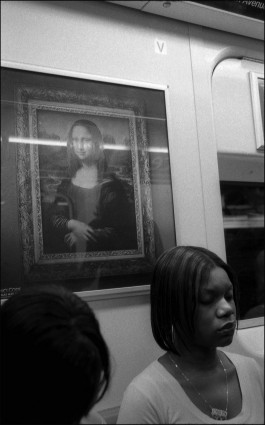 In war photography it does not seem likely that Robert Capa got permission from the “Republican Soldier”  before he was shot dead during the Spanish Civil War or for that matter from the soldiers dying at Omaha Beach. Other examples of photographers not asking permission from their subjects are Garry Winogrant, Joel Meyerowitz, Friedlander, Arbus, Cartier Bresson and Salgado. There are too many other examples to mention.   I agree that we photographers have a duty to portray our subjects with honesty, that we don’t misrepresent them or make them look or appear anything else than what they are. To intrude into a private space and photograph people in that privacy without permission should be and is illegal and is at least unethical. If we want to portray and lay witness to the world around us we should do so with integrity and honesty.